After reviewing products for over 4 years I’d like to think that I have a pretty good idea of what my likes and dislikes are. That I can look at a product, read the materials, how it works and very quickly determine if it’s quality or not. More importantly, that when I see a product I’ll almost instantly know if it’s for me.

For the most part my instincts are pretty good and have helped me to skip the crappy intimate accessories for ones that are often much more favorable, not to mention far more deserving of the title “sexual wellness product”.

Of course there are other times when my radar goes awry and I’m stuck clutching something I’m not only perplexed by, but also disappointed with, seriously wondering why I chose it in the first place. Such was the case with the Fun Factory Yooo, a product I specifically asked the lovely folks at Eden Fantasys for, which they generously obliged.

While there are a few issues I have with the Yooo, there are of course a few things it does have going for it;

First, it’s crafted out of high quality silicone that’s non toxic, hypo allergenic, hygienic, latex and phthalate free, odorless, easy to clean and care for, while also being velvety smooth to touch. Unlike other silicones it doesn’t really collect lint (a pet peeve of mine), has some give and squish to it, and although there is a slight bit of drag, it’s not much to worry about.

Secondly it’s very, very discreet. Whether you live in a dorm, have a roommate, share space with nosy siblings or are simply worried that someone may come across it, you should be fine; there’s a very likely chance they’d either think it was a kids toy, some weird addition for your computer or possibly something for the bath instead of a sexual wellness product.

Third, it’s rechargeable. I know for some of you that isn’t really an issue but after losing many products during my early days to the evil corrosion of batteries, along with the amount of money I’ve spent on them, I had to learn the hard way why having products that are rechargeable is not only smarter, but saves you quite a bit of money in the long run.

Fourth, if you like to bring toys into the tub, or if you have to due to your living arrangements, the fact that it’s 100% waterproof may be a very big selling point. While I’m not necessarily one for bath time fun, I did find the lowest setting very relaxing during my bath.

Fifth, the packaging is discreet, professional, rather hi tech looking and comes complete with 4 different languages to explain the product. There is nothing on it that’s rude, inappropriate, embarrassing or something that would cause you to shy away. Sure the write up is a little tacky (the mention of the ‘balls’ is done far too often lol), but for the most part it’s nothing to worry about.

*I actually turned it on and tossed it on the chair in the living room while my fiance was playing video games just to see how long it took before he heard it and asked what the hell it was. Let’s just say the cats were far more curious and noticed way before he did. 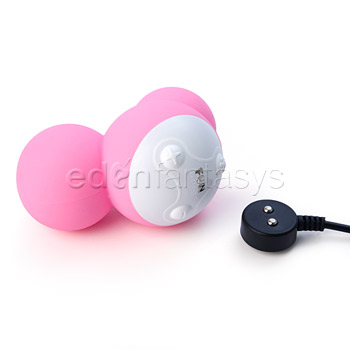 Aside from many benefits and features found with the Yooo, there are of course other aspects like size, maintenance and operation that should be addressed.

While the majority of the product is made of high grade silicone the front of the ball (where the buttons are located) is made of a body safe ABS plastic that makes it rather firm with no squish or give. It doesn’t really make much difference when it comes to using the product, but since it’s not 100% silicone I felt it was worth mentioning.

In regard to the size and shape of the product you’re basically looking at 3 spheres, or bubbles if you will. The middle one houses the buttons, provides an easy way to hold the product, while also giving you the surface area to magnetically connect and charge your Yooo. The two smaller balls are slightly different, with one measuring 1.75″ across and the other measuring 1.5″, each of which hold their own separate motor. It’s these separate motors that offer different methods of stimulation and allow you to explore and play until you find a position that works for you and your body.

*for those of you wondering, it gets its name from the three different ‘O’ shaped parts that make up the product.

As for operating the product, there are only 3 buttons to worry about; a (+) plus, (-) minus and flower shaped ‘turbo boost’. To turn it on simply press down on the (+) button for 2 seconds and it begins to vibrate at a low rumble, press again and you go to the next speed and so on. Once you’ve reached the highest basic speed holding down the (+) button will jump the vibrations over to an escalation, with the dial of the buttons glowing in sync with the vibration pattern. Hitting the (+) button again will take it to the next pattern and so forth. In total you’ve got 4 patterns to run through. If the (-) button is pressed at any time during the patterns the vibrations go back to the highest setting before you hit the patterns. Find it confusing? Yeah, so did I the first couple times around. Having said that there is most definitely a learning curve. To turn it off simply press down on the (-) button which will lower the speeds, tap it once more and it turns off.

*If at any time you want to have a surge of power just press down on the ‘turbo button’ and the Yooo will vibrate at a hand numbing speed. No joke. My whole hand went numb in no time.

When it comes to recharging place the circular charger over the Fun Factory logo (located in the center of the buttons) and once magnetically connected, the charger will glow red.  If at any time the glowing stops you may want to check for a disconnection.

As for care and cleaning, since it’s water proof and made of silicone you can simply wash it with mild antibacterial soap and water, making sure to rinse it well.

When it comes to lubricants I’d only suggest a good water one as a silicone would likely ruin it over time.

In regard to ways of using it there are 3 options that I see, with the possibility of 4 if you can manage it. The first is for a nice, relaxing massage since the Yooo hugs curves in the neck and shoulders rather comfortably.  The second is during foreplay to tease and taunt your partner into arousal, whether it’s tracing over their nipples, inner thigh, forearms or feet. Next is clitoral stimulation and the last, which again is an option only if your capable of it – gently inserting one of the balls vaginally while the other stimulates the clitoris. It won’t work for everyone, but for those that it does – enjoy!

The first issue I had with the product was in regard to the charger; because the product connects via a magnet there were many times that I left the room only to come back and find it disconnected. Annoying, frustrating and disappointing are definitely a few words that come to mind.

Next up are the vibrations – while some may be very impressed with them I unfortunately wasn’t. That’s not to say it isn’t relatively powerful or that the sensations aren’t enjoyable, it’s just that the vibration itself is very rumbly, buzzy and feels like it’s sitting on the surface, rather than being a deep, heavy and completely arousing vibe. Unfortunately it seemed like the only way I could reach orgasm was by continually hitting the turbo button. Keep in mind that this is just me and my body is likely different from yours. What works for some doesn’t always work for others, a point that’s clearly made with my experience.

On that note, while it does have two separate motors I couldn’t feel the difference between them like I did with the Lelo Ina. Yes, Ina is a different product all together, but if you can’t differentiate between the sensations what was the point of doing it in the first place?

Aside from that the buttons are rather hard to press and require a bit of force. Maybe it was just mine, maybe it was because it was new, either way it was slightly frustrating especially in the heat of the moment when hands are a tad lubed.

Finally, the shape itself leaves much to be desired as it doesn’t offer much by way of overall stimulation, makes targeting one area rather difficult, and for me didn’t feel the most comfortable. Not that it hurt, because it didn’t, it just felt awkward and weird.

If you’re looking for a high end product that’s very unique in design and is therefor discreet, while also being quiet, rechargeable, powerful and something you can take in the  shower or bath, the Fun Factory Yooo
might just be for you. If on the other hand you’re specifically looking for a great clitoral stimulator, one that targets the area, has a deep and penetrating vibration, while also offering variable patterns and speeds, you might want to look at something like the Form 2, Insignia Alia or the We-Vibe Touch.

Don’t get me wrong, my love for Fun Factory as a company still remains and the product itself definitely well made, easy to use and high quality, it just sadly didn’t do it for me. I guess sometimes the old says can ring true – stick with what you know. From now on, that’s what I’ll be doing.

If you’d like to get more info on the product, read other reviews, get your hands on some great intimate accessories or simply want a place to shop that’s safe and secure, make sure to head over to Eden Fantasys where shopping is easy, fast and affordable.

Hi Kara Sutra I'm a long time fan of yours and I've watched all of your videos. I was hoping...